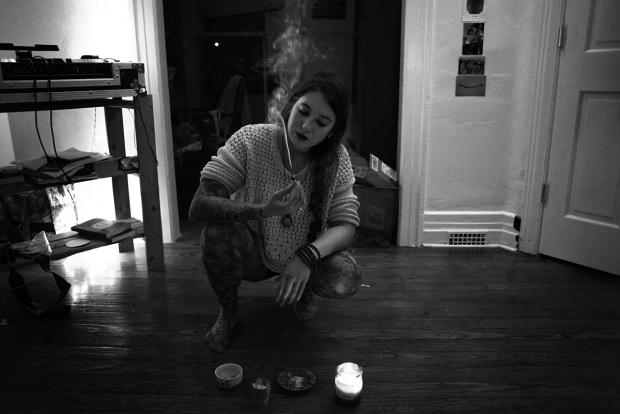 For Interarts Performance senior Anya Klapischak, art isn’t just her major. Rather, her work reflects a true passion and dedication, one that’s evolved since she arrived in Ann Arbor for the first time.

“When I first started out doing a performance (art), most of my work was about my problems or about my illnesses, insecurities and weaknesses,” Klapischak said. “(But) it wasn’t actually solving any of those problems because I was still giving enough power to those problems to make work about it … instead of channelling my energy into something new and something I would consider to be a strength or a positive thing.”

The progression of Klapischak’s art is a reflection of the positive experiences she’s shared with her peers, though that is not to say she hasn’t challenged the rigidity of a university program.

“I have a hard time with the culture of any program in which it’s all focused on this individualistic aspect of the art where you hole yourself away in the studio and you paint furiously or you sculpt furiously and it’s all coming from you,” Klapischak said. “The solitude and the real loneliness of it is going to prevail the artwork. Which is why I don’t think I’ll ever be a solo performer.”

Instead, Klapischak is focused on continuing to work with others, which is something that has remained consistent throughout her career. She thrives when collaborating with as many as 15 other people who are equally as committed to the final product as she is.

“Working in collectives and working in art groups, any sort of work with other theatre individuals, that’s prime for me and I think that’s where — if there is a self — that’s where I started to discover my sense of self.”

Klapischak was interested in discussing her experience at the University, but when asked about her current project, it was as if the true passion within the artist was unleashed. In her words, she “did a little experiment,” directing me to close my eyes and hold a small, clear crystal. In doing so, I was assisting her in a key piece of research for her Integrative Project.

“The way that I put it into words currently is, I’m exploring the appearance of spirituality for our generation; what it looks like when we practice spirituality or commit ourselves to some sort of seeking,” Klapischak said. “I’m really interested in finding out what ties our generation together in terms of that journey, towards some sort of enlightenment. And my hypothesis is that it is the tie that binds all of us as we walk and live and breath.”

Spirituality is an integral part of Klapischak’s research and something she connects with very personally. But there is another component that has fueled the development of her senior project.
“They have a saying about ayahuasca: ‘You don’t find ayahuasca, ayahuasca finds you.’ And I found that to be really true last year … when suddenly I just came to this point where I thought the best thing I can do right now is go down to the jungle, drink some ayahuasca and talk to the Devil. And that’s what I did.”

Ayahuasca is a psychedelic brew made from a South American jungle vine and a variety of other plants. It releases a large amount of DMT in your brain, which for Klapischak resulted in “absolutely illogical and irrational visions” (her ayahuasca “fireworks”).

“That had a really profound impact on what I was thinking about,” Klapischak said.

Despite the fact that spirituality and her unique experiences, like the one with ayahuasca, were so integral to Klapischak’s life and what she does, it took time before she was ready to integrate the two in her art.

“When my Integrative Project professors came at us with the question of ‘What is it you care about most?’ … it took so many mental leaps for me to say, ‘OK, if this is the thing I care about most, what’s keeping me from making work about it?’”

Klapischak’s exploration with the drug also forced her to question other aspects of society back home, which too has inspired aspects of her project.

“I also found myself the entire time having a sideways glance at the entire experience, where I was surrounded by 14 other white people from the Western World and I was asking myself, ‘What is happening in where we live respectively? What are we not getting from our daily lives that makes all of us white people come down here to the jungle to pay for this spiritual experience?’ ”

Klapischak views her work as a series of questions, rather than a search for definitive answers. And her experiences, at both the University and in the jungle, have informed and guided her throughout the completion of her Integrative Project.

“I think that’s where this whole project is going to find its home … in this balance between the serious nature of it, the part of it that I take so seriously and will commit my life to, and also the comedic nature of it, where it’s like, you know, a bunch of fucking hipsters from Brooklyn,” Klapischak said. “Ideally, the comedy of the entire situation and the comedy of this entire life will come to fruition and will be relevant in this piece.”

If you would like to contribute to Klapischak’s research, email [email protected]