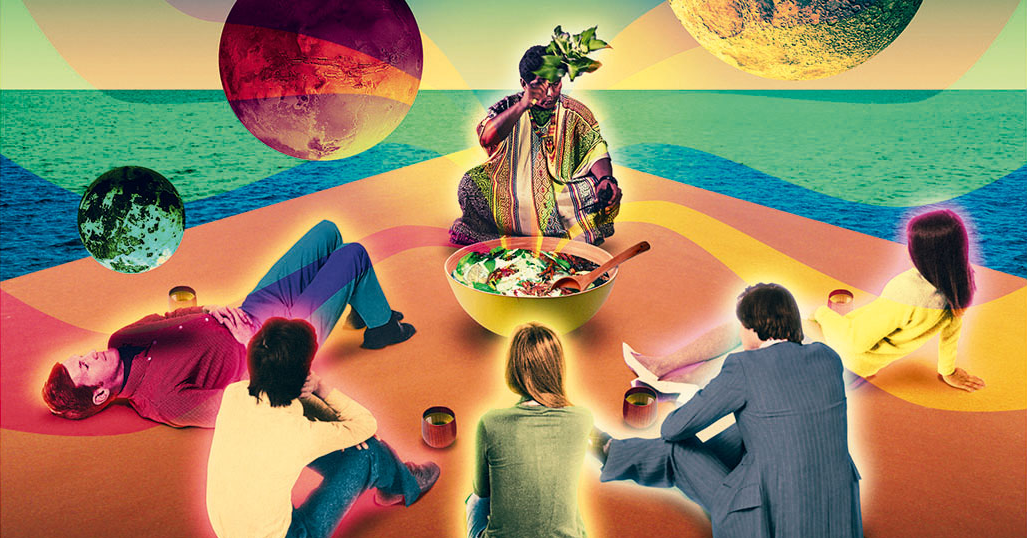 Call it group therapy in 2015 Los Angeles. At a Topanga Canyon house, a shaman from the Amazon River region has been flown in for an expenses-paid weekend, to the tune of up to $10,000, to perform an ayahuasca ceremony. Somber people sit on mattresses in a circle on the floor, buckets and rolls of toilet paper placed ominously in front of them, with the occasional crystal decorating the tableau. The man in the middle wears Peruvian cottons and feathers in his hair and is called an ayahuascaro or curandero, as shamans are known in the Amazon. He will administer the muddy tea — as far from Earl Grey or Darjeeling as it gets — boiled from chacrunaleaves and ayahuasca (also called caapi), one of the world’s most potent psychedelics, derived from a vine that grows only in Peru and Brazil (though lately it has been harvested from parts of Hawaii). He will watch over the participants as a type of hallucinogenic conductor. Purported effects of imbibing include life-altering visions, clarifi­cation of purpose and a lifetime of psychiatry — all in one dose.

Ayahuasca also is known as plant medicine, “the little death,” the spirit vine and “yage” (which Allen Ginsberg and William Burroughs described doing in their 1963 novel The Yage Letters). The active ingredient in the tea, which has been around for thousands of years and is the basis of two South American religions, is DMT (dimethyltryptamine), tiny amounts of which exist in parts of the brain associated with visual dreaming. DMT is illegal in the U.S., classified as a Schedule 1 drug for its high likelihood of being abused. That hasn’t hindered its Hollywood fans: The danger is part of its badass appeal. “The circles are invite-only,” says one participant in the Topanga ceremony. “You have to be vetted” — via interviews and recommendations by friends — “to show you’re serious.”

In the Amazon, ceremonies are conducted in huts. In L.A., they take place in homes from hippie to swanky — in Topanga, yes, but also Silver Lake and Malibu, even Culver City. They’re like Hollywood dinner parties, but with DMT instead of wine. “On any given L.A. night, there are 50 to 100 circles being conducted,” claims a frequent participant. Says the Topanga host, a Hollywood psychiatrist: “Shamans are flying all over the world with iPads now. They know it’s time to bring plant medicine to the West.” He adds, without irony, “The plants told them Hollywood’s a good place to get the word out.”

It seems to be a successful strategy. To name just a few instances, in the 2012 film Wanderlustand 2014’s While We’re Young, characters portrayed by Jennifer Aniston, Naomi Watts and Ben Stiller act out on aya, and then there’s Mary-Louise Parker‘s drug dealer, who once uttered on Weeds, “Peyote’s a bicycle; ayahuasca, a rocket ship.”

Among the invite-only circle at this ceremony — who each doled out several hundred dollars for a drink — are a movie producer, a fashion designer, an entertainment lawyer, a screenwriter, a Malibu environmental engineer, a life coach, two actors, a therapist and a musician. Everyone has followed a prescribed pre-ceremony dieta for two weeks to a month: no alcohol, spicy food, sugar, garlic, onions or coffee — and no sex. “It’s not that different from your typical L.A. diet,” says the designer, “except for the sex.” None is an aya newbie — they have been down this inner path before — but compared with your usual drug-enhanced Hollywood gathering, “this ain’t no disco,” mutters the musician. “It’s hardly what you’d call partying.”

But it is BYOB — bring your own bucket — for the likely purge from one end, the other or both. “I’ve seen diapers and buckets,” says a Westside independent producer who often partakes. “You poop and you puke, and you get high.” Sometimes mucus spouts from the nose. Shamans interpret various ejected matter as bad spirits being banished from the body. “You’ll feel healthier, cleaner, freer,” says the therapist. Fortunately, the house owner has no problem with the puking: “We do a vehement cleaning the next day.” 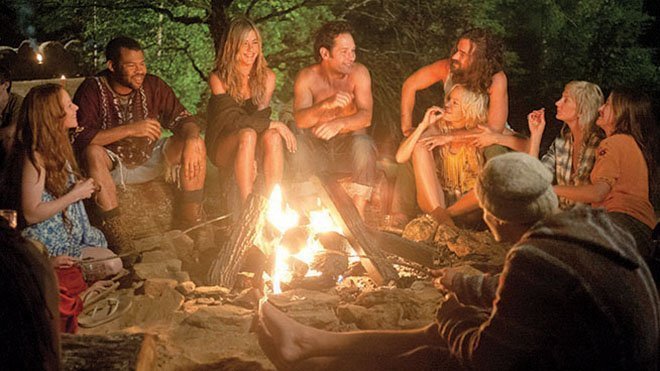 Aniston and Paul Rudd play a couple who try aya in the Universal romantic comedy ‘Wanderlust.’

One might think the nasty phy­sical aspects — or the idea of sep­arating from one’s ego — would deter Hollywood’s elite, but for at least a decade, the likes of Sting, Tori Amos, Courtney Love, Robin Quivers, Penn Badgley and Terrence Howard have par­taken. A bit of Jim Carrey lore takes on a different dimension when recounted by an L.A.-based shaman: a tale of the actor on ayahuasca, refusing to get off a mountain until he believed he could earn $10 million a picture — which, eventually, he did. It’s whispered that Leonardo DiCaprio has contributed to Amazonian charities with ties to ayahuasca. And Chelsea Handler recently announced plans to ingest the plant live on camera for her experiential Netflix documentary series.

Says a past Emmy-nominated writer about the so-called divine vine’s popularity in town: “There are so many [circles] now. Throw a stone 10 miles anywhere in L.A. and hit an aya ceremony.” Why here? “It’s the edge of the continent,” she adds with a laugh. “This town’s known for all things experimental and expansive. That’s what creatives do for a living.” An L.A.-based rock tour manager describes seeing “my normally feathered Ecuadoran shaman bagging groceries at the Brentwood Whole Foods. It’s everywhere in L.A. I hear people talking about it at Soho House.” Contends the therapist: “The groups are biggest in Hollywood. There can be 100 people lying down in one room.”

For the Topanga circle, the shaman commences by singing icaros, musical prayers in local languages like Quechua, mixed with Spanish. These songs are so prevalent, says the musician, “you can download them on iTunes.” The shaman partakes first of the barky brew, then pours it into cups. The first person to sip, the screenwriter, twists his face. “It tastes like a mixture of gasoline, feces and cut grass,” he says. “That’s the nice way to put it.”

In 40 minutes or so, the curtain will rise and the visions begin, lasting one to four hours. But the hallucinations are not quite Alice in Wonderland: Mechanical dwarves, reptilian creatures, giant buglike monsters and blue people like those in Avatar (which, along with The Matrix and the opening credits of Game of Thrones, aya bloggers claim are re-created vine visions) have been cited as populating the fleeting waking dreams of users. “The first thing you see is often your worst fear come to life,” says a former Emmy-winning television producer. “Mine was Holocaust horror.

Another time I saw a 50-foot black widow spider — my fear of death manifesting. It illuminates the dark of your subconscious, and like a horror movie, once you see it, it no longer scares you.”

The relationship coach recalls a less traumatic experience: “I’ve seen what looked like a Star Warsset: dragonflies, sparks of light, plants, stars — everything moving. You go into it asking Mother Ayahuasca a question, then she shows you what you need to know.” Recalls a local healer who travels to Peru often: “I saw a spaceship the first time, then a machine with little gears and fobs. ‘This is how the universe works,’ a woman’s voice told me. The more you do it, the less anxiety you have. It lifts us out of the isolation everyone feels, particularly in Los Angeles.”

The plant medicine certainly has changed lives. Giancarlo Canavesio, an international investment banker until he drank the plant psychedelic in 2007, now is a producer of documentary films, including a few about ayahuasca, and the founder of Mangu.tv, a site devoted to spirituality and science. He attributes the switch to how “ayahuasca miraculously makes you feel the connection with others and with nature.” The drug might inspire careers in the entertainment industry, but it also has been known to end them. After ingesting the stuff, the ex-television producer became a relationship coach: “It pummeled me into love, but the hard way.” Days of Our Lives actor James Scott says he left the soap after eight years because “drinking ayahuasca turned me into a different kind of person.” Aya also seems to inflame creativity: Paul Simon‘s 1990 song “Spirit Voices” was inspired by his Amazon visits, and musicians Klaxons, The Bees, Devendra Banhart, Father John Misty and Ben Lee (whose 2013 album is titled Ayahuasca: Welcome to the Work) have written about the tea. 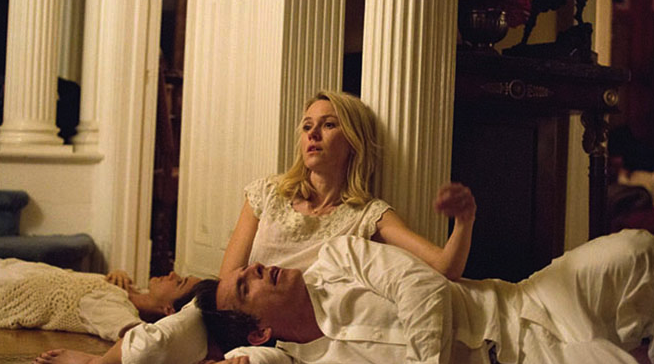 Watts has said of the ayahuasca scenes in ‘While We’re Young,’ in which she stars with Stiller: “It’s difficult to play high. I’d never even heard of ayahuasca before. I can’t remember now if you actually see me vomit, but allegedly that’s what happens. God knows why anyone would want to do that.”

Enlightenment and creativity aren’t the only supposed benefits. According to an insider, at least one prominent Malibu clinic refers addicts to ayahuasca circles to uncover the underlying fears that incited their drug use. “My shrink sent me because I could not get off Klonopin,” says an L.A. tech entrepreneur. “In the end, it was the only thing that worked.” Chronic rehab occupant Lindsay Lohan hailed results on her reality show. And while there isn’t a body of research to prove success rates in treating addiction, a 2012 University of London biomedical study found one result of “ayahuasca use appears to be … a reduction in recidivism to alternate (alcohol, cocaine) drug use.”

Plant medicine, when interacting with serotonin reuptake inhibitors or dopamine, can cause the potentially deadly serotonin syndrome, so weaning off antidepressants weeks prior to imbibing is a must. “But if they do give them up, they may never need to go back,” says the therapist. “Ayahuasca can rewire the brain” and has shown signs of curtailing depression and PTSD, as noted in the April 2015 issue of Scientific American.

Hollywood internist Gary R. Cohan begs to differ: “Ayahuasca contains chemicals found in SSRI antidepressants like Prozac and dangerous, older MAO-inhibitor antidepressants like Parnate. There are potentially serious side effects, both with other drugs and food. Foods that contain tyramine — alcohol, cheese, meat, chocolate — can theoretically interact with ayahuasca to cause severely elevated blood pressure, resulting in strokes and extremely high body temperatures, which can cause death. I strongly advise my patients against using it recreationally or ‘spiritually.'”

In fact, a handful of deaths in Peru of tourists with heart ailments and high blood pressure have been recorded. Kyle Nolan, an 18-year-old California teen seeking spiritual rebirth in the Amazon jungle in 2012, wound up being buried at the centre where he took the drug. His shaman was convicted of homicide and sentenced to five years in prison. There’s also the dropout factor, as experienced by actor Scott. Says a Westside acupuncturist: “My ex-husband took it for years. He became despondent, noncommunicative and stopped working.”

But for many ayahuasca devotees, the troubling aspect is its hip factor. “The issue in Hollywood,” says a fashion branding expert and weekly user, “is it’s too trendy, and lightweights are trying it. LSD is movie popcorn compared to ayahuasca. If you call it a trend, people get very upset — that totally trivializes it.” Charles Grob, a UCLA professor of psychiatry and biobehavioral sciences who began researching aya in 1993 (and claims that it’s nonaddictive), explains the appeal: “People came back from Peru with stories of powerful transformation,” he says. As psychedelic writer Jonathan Talat Phillips puts it, “The rise of festival culture, Burning Man, plus technology — it’s all making everyone desires a deeper place.”