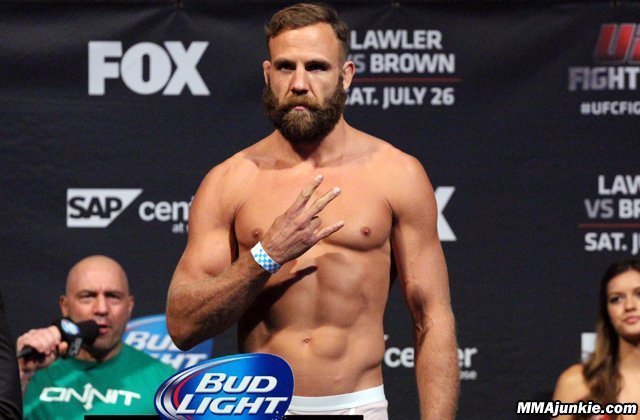 Ayahuasca is becoming more and more prevalent in society today, and Kyle Kingsbury is now advocating for the powerful psychedelic. After a punishing loss to Patrick Cummins last month, Kingsbury called it quits and retired from MMA. The bout marked Kingsbury’s first Octagon appearance in nearly two years.

Kingsbury spoke with MMAJunkie about the bout and his experience with ayahuasca.

“This was for me,” Kingsbury told MMAjunkie. “This fight was for me. I wanted to see if I could go in there with a clear head and perform. In terms of what I was shooting for from a mental standpoint and an emotional standpoint, I definitely got what I was looking for, and on the biggest stage.”

“It’s extremely introspective,” Kingsbury said. “People call it psychedelic, but it’s not like you just sit there and see trails or s–t like that. You have profound visions that are very meaningful and very personal. I’ve had the opportunity to do it five times, and each one of those peels another layer of the onion, and I’ve learned more about myself and life in general. Doing that, I’ve come to terms with a lot of things about my life. I’m a happier person all around.”

“There were times in this camp where, because of the things I’ve learned, if I had a bad day, it didn’t get me down,” Kingsbury said. “I’d just say, ‘Hey, I had a bad day of sparring, but I put in good rounds and I’m getting better.’ On that level, I was correct. I wasn’t lying to myself. But on a different level, there wasn’t that ‘Holy s–t’ factor where I’d feel like I’ve got to change up and get going now.”

“There was an itch inside me when I first started fighting,” he added. “I really wanted to hurt people and I didn’t give a s–t about anything else. I just wanted to punch someone in the face as hard as I could. By the end of my career, that was gone completely. I wanted to win and compete, and more than anything to push myself to be my best, for emotional, physical, and mental wellness. But to go in there and be successful, I think you do have to have that chip on your shoulder. You have to have that angst, that small spark. You don’t have to fight angry, but you do have to have some anger inside you in order to really throw punches with aggression and really want to hurt someone else. I don’t have that anymore.”

Kingsbury reflected on his first of five encounters with ayahuasca.

“I thought, why the hell do people do this if it makes you feel this way?” Kingsbury said. “I kept getting more and angrier, getting annoyed at the people I was with, and I remember just being filled with anger.”

After experiencing the anger Kingsbury began the purging phase of ayahuasca where the user suffers from vomiting and diarrhoea.

“When you come out of it, you’ve changed,” he said. “There’s no hangover. There’s no sense that you’ve got to go back and do more. But you do feel completely content with your life and everything around you. You have a new outlook, and it affects the way you view yourself, your friendships, your relationship with your family, everything. That’s permanent.”

“I wanted to know, can I be calm in that type of stress?” Kingsbury said. “Can I be calm in front of that many people and fight with a level head? I really wasn’t able to do that in any of my other fights. I always fought inside my own head so much. At the weigh-ins, I used to have almost like a panic attack. I had to remind myself to breathe. I’d get so nervous just looking at my opponent. This time, I didn’t even have to try to remain calm. It was almost like an out-of-body experience. I was at peace the entire time. Even in the fight, I was at peace, so much so that I probably needed a little kick in the ass or a sense of urgency.”