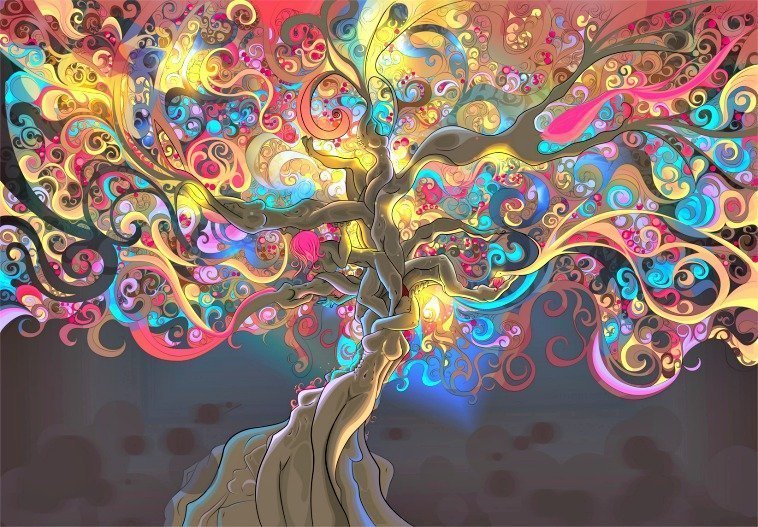 [vc_row][vc_column][vc_column_text]The civilization of Egypt as we know spans back thousands of years to the days when the last great glaciers in the world were melting (10,000 BC). This information, as many of you may know, has been systematically removed and ignored from nearly every history book written in modern times. The Egyptians were an incredibly aware and spiritual society, which had deeply entrenched beliefs about reality as we perceive it as well as the realities that most of us are not aware of.

Spirituality played a huge role in the lives of Egyptians, and this is depicted in the hieroglyphs that they have left behind on the walls of their tombs or in the fragments of papyrus that are unearthed. Uncovered in this forgotten language are references to the tree of life. I am sure many of you know what I am referring to, the plant Acacia Nilotica. A tree that grows abundantlyalong the Nile River and was glorified by the Egyptians.

Acacia Nilotica contains Dimethyltryptamine, or DMT. DMT is not a rare topic amidst the articles on Collective Evolution and I advise all of you to check out the articles about the mind-blowing experiences that derive from DMT trips.  This is the same compound that is used in shamanic rituals in the Amazon with the drink Ayahuasca. Today, the idea that DMT can further ones experience on earth as well as having many healing qualities (both physical and mental), is slowly becoming more and more recognized. At this point I affirm that we are just at the beginning of a journey that many civilizations have taken before us, the Egyptians included.

Acacia Nilotica is portrayed hugely in Egyptian mythology. It is referred to as the tree of life, and from under this tree the first gods of Egypt were born. Osiris, god of the underworld, rebirth and the spirit was also born from an Acacia Nilotica tree. Osiris is also believed to live inside the spirit of all Acacia Nilotica trees. This is a very similar belief as held by the Amazonian Shamans and the people who have experienced Ayahuasca. A huge majority of DMT users talk about the “mother spirit” who guides the individual on the trip and teaches them what they need to learn on that specific trip. I believe that the Egyptians partook in the Acacia trip, and this was seen in the same light as the way Native Amazonians see Ayahuasca. DMT would have only been used for spiritual purposes, in order to gain enlightenment and talk to the “gods.” In their case the guiding spirit that they found in their trips was Osiris. It is interesting to note that on the outer-body experience that is associated with DMT many people have found themselves seeing deceased friends and family, therefore Acacia Nilotica is a fitting symbol of the underworld and the spirit. The majority of DMT users also find a sense of rebirth after their trips, also being a fitting characteristic of the Acacia Nilotica. In modern archaeology of Egypt, Acacia Nilotica has been found in a huge percentage of the tombs unearthed.  I find it highly unlikely the Egyptians did not recognize the uses of this plant and I believe the evidence speaks for itself.[/vc_column_text][/vc_column][/vc_row][vc_row][vc_column][vc_empty_space][TS_VCSC_Lightbox_Gallery content_images=”8409,8410,8411,8408,8406,8412″ content_style=”Freewall”][/TS_VCSC_Lightbox_Gallery][vc_empty_space][vc_column_text]Yet Acacia Nilotica was not just revered in Egypt. The plant grew throughout the middle-east and its symbolism exists even to this day. To the east of Egypt, Judaism flourished, and once again Acacia Nilotica has huge symbolism. In the book of Moses, it is said that the tree that was set afire in front of Moses was an Acacia Nilotica tree. This is fitting as the Acacia can be found in over 3 different sub-species (all containing DMT) in the Jordan Valley and Sinai Desert. In both Hebrew and Judaism, the Acacia was recognized as Sacred and was revered as a building material saved only for temples and the likes. According to Judaism, the ark of the covenant was made of Acacia Nilotica. Again I believe that Judaism was heavily influenced by DMT and its connection to the “spirit world.” In pre-Islamic Mecca, the goddess of their religion was also Acacia Nilotica and was so similar to the Egyptian beliefs around Osiris that there is nothing really to explain on the matter.

Moving forward through history to the modern day, Acacia Nilotica is still revered in society by its “Elite.” Since its founding the Freemasons have placed heavy reverence on the Acacia Nilotica, claiming that is sacred properties of the tree represent the purity of the soul. The Freemasons claim that they received this information from the last of the great Egyptian thinkers. If the Freemasons are really some sort of utopian superpower in the world, it is clear why Acacia Nilotica is rarely recognized as a Psychedelic. If the majority of the world were to experience the spiritual journey users undertake on DMT, they would no longer be bound by the chains of the ego or fear. As Aldous Huxley explains in his book ‘Doors of Perception,’ the world of Men and Women would be rid of the religious symbolism and become one with each other and in-tune with the world around them.

I think that a substance so revered in such crucial times in Spiritual history has nearly been lost. I believe that a resurgence of the spiritual art of using Acacia Nilotica for its DMT characteristics would help in the Spiritual path we are fighting to stay upon and would strengthen the consciousness of our society. I do not think that it is mere coincidence that this substance has been chosen by these civilizations to symbolize purity, rebirth, spirituality and the underworld. If you would like to do more research on DMT as well as Acacia Nilotica I would recommend the book ‘Gnostic Visions: Uncovering the Greatest Secret of the Ancient World’ by Luke Myers.[/vc_column_text][/vc_column][/vc_row]