Albert Hofmann The Father Of LSD 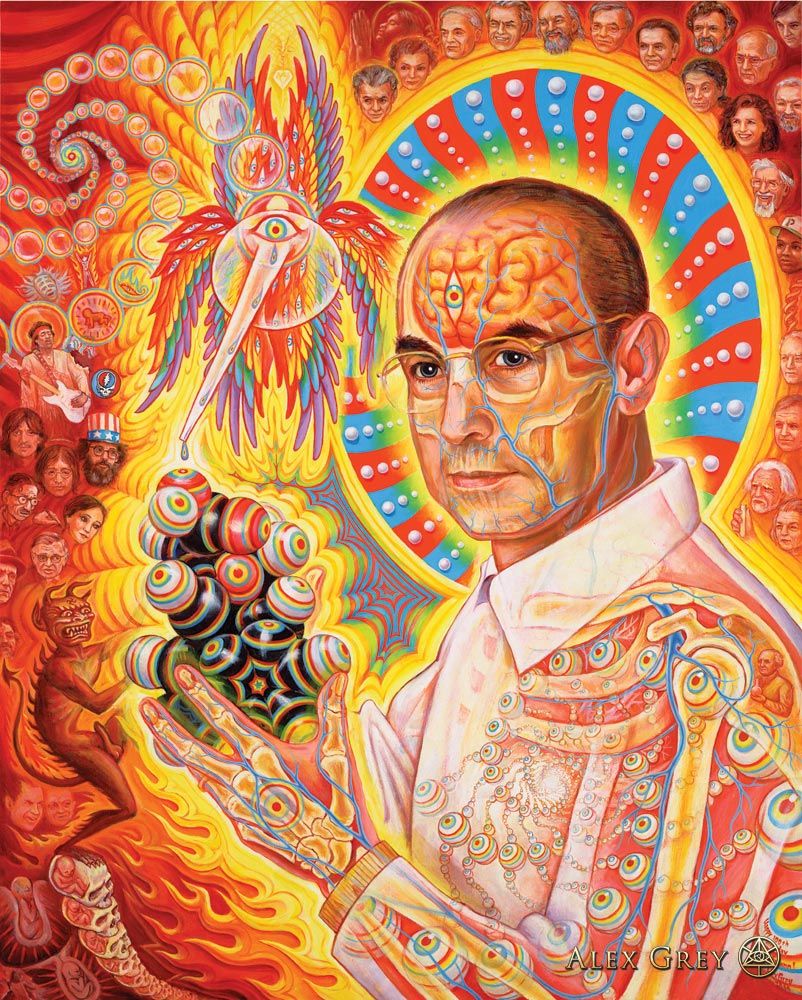 In 1938, Albert Hofmann (January 11, 1906 – April 29, 2008) was working as a research chemist at the laboratory of the Sandoz company in Basel, Switzerland, where he began studying the medicinal properties of plants. He was studying the alkaloid compounds of ergot, a fungus which forms on rye.

This poisonous fungus that grows on rye had been used for centuries as a folk remedy to bring on childbirth and ease headaches. The doctor believed that ergot could be a storehouse of new medicines, and he set about synthesising new chemicals from it. In 1938, Hofmann had synthesised the 25th chemical: lysergic acid diethylamide. It showed little effect in test animals, bar restlessness, and it was shelved.

Five years later, on a hunch – or a “peculiar presentiment”, as Hofmann puts it – he brewed up a fresh batch. In the process, he was overcome by dizziness. Sent home, he “sank into a not unpleasant intoxicated-like condition, characterised by an extremely stimulated imagination”.

The next day, Hofmann concluded that the sensations could only have been caused by accidental exposure to something in his lab, perhaps the LSD. To be sure, the cautious doctor gave himself an extremely conservative amount of the chemical – 250 millionths of a gram. It was, in fact, the equivalent of a megadose of the mind-agent, still one of the most powerful known to man.
Albert Hofmann began his historic ‘Bicycle Ride’ back home when he realized the world had changed dramatically. The smallest of dozes began to show in the vivid patterns and colors he saw in the changing landscapes as he made his way home.

“Everything in my field of vision wavered and was distorted as if seen in a curved mirror,” said Albert Hofmann.” I had the feeling that I could not move from the spot. I was cycling, cycling, but the time seemed to stand still.” It was 1943, and Hofmann was experiencing the world’s first LSD trip.

By the time the frightened 37-year-old research chemist reached home, he was terrified. The room spun. The walls rippled. His worried neighbour who offered him a glass of milk had horrifically transformed as well. He felt like he was dying. After a few hours, the intensity of the experimental drug he’d dosed himself with fell and he was able to enjoy the “fantastic and impressive” effects. Next day, he felt wonderful as he took a walk in the wilderness … feeling oneness with everything around him … “A sensation of wellbeing and renewed life flowed through me. The world was as if newly created.” LSD’s effects did not come as much of a revelation to science. Such psyche-manifesting agents, or “psychedelics”, were already well known. Mescaline had been discovered in the late 1800s and made famous in 1954 as the subject of Aldous Huxley’s book The Doors of Perception. What was extraordinary about LSD was its power. It was about 10,000 times more powerful than mescaline, and a tiny amount was enough to trigger profound alterations in consciousness. Soon, LSD caused a revolution in psychiatry. Therapists and doctors used it to treat forms of mental illness, including neurosis, psychosis and depression. More than 40,000 people underwent psychedelic therapy. Respected figures considered it a wonder drug and gave their careers over to LSD research. By 1965, more than 2,000 papers had been published, many reporting extremely positive outcomes in treating anxiety, obsessive compulsive disorder and alcoholism. Hofmann’s vision of LSD as a “medicine for the soul” seemed to be coming to fruition. LSD began to leak out into élite society. Artists, painters, performers and musicians began to experiment with it in looser, less formal contexts. Anaïs Nin, Ken Kesey, Allen Ginsberg and Huxley all explored its creative potential. Huxley believed such drugs gave normal people the gift of the spontaneous visionary experience usually reserved for mystics and saints.

The public grew more and more curious about this “miracle drug”. Self-experimentation began to increase. In a society facing growing industrialisation and urbanisation, alienation and boredom, everyone wanted to be reborn. Already, a counterculture had sprung up to oppose the wealth-driven homogeneity of capitalist America. LSD was rapidly adopted as the sacrament for this bohemian “hippie” movement. In the age of the moon landings and the exploration of space, here was a tool that allowed a similar, metaphorical journey, a short cut to enlightenment. By the mid-1960s, the drug was booming. Hofmann remembers the time distinctly. “I had not expected that LSD, with its unfathomable, uncanny, profound effects, so unlike the character of a recreational drug, would ever find worldwide use as an inebriant. People had the mistaken opinion that it would be sufficient simply to take LSD in order to have such miraculous effects.” Rampant use led inevitably to “bad trips” among recreational users, and Hofmann could only watch with a mixture of astonishment and dismay. “They did not use it in the right way, and they did not have the right conditions. So they were not adequately prepared for it,” he says. “It is such a delicate and deep experience, if used the right way.” He was stricken by doubt and concern that misuse and fear of the drug would lead to it being taken out of the hands of responsible investigators and psychiatrists. Would LSD – the drug which, on that spring day in 1943, reconnected Hofmann with the “deeply euphoric” visionary encounters he’d experienced in nature as a boy – become a blessing for humanity, or a curse? A curse, the authorities concluded. In 1966, the drug was outlawed around the world. Psychiatric treatment continued but was steadily throttled by red tape and LSD’s reputation as an “insanity drug”. By the 1970s, research had stopped altogether. Today, it languishes in near obscurity, banished to the fringes of science and society. ” Wrong and inappropriate use has caused LSD to become my problem child,” he says. “The history of LSD to date amply demonstrates the catastrophic consequences that can ensue when its profound effect is misjudged and the substance is mistaken for a pleasure drug.” He took the drug many times. He believed it to be just another means to attain extraordinary states of consciousness. ” Breathing techniques, yoga, fasting, dance, art ” , he said were equally good. He took pleasure in recalling his boyhood experiences in nature that he linked with psychedelics. ” LSD brings about a reduction of intellectual powers in favour of an emotional experiencing of the world. It can help to refill our consciousness with this feeling of wholeness and being one with nature.”