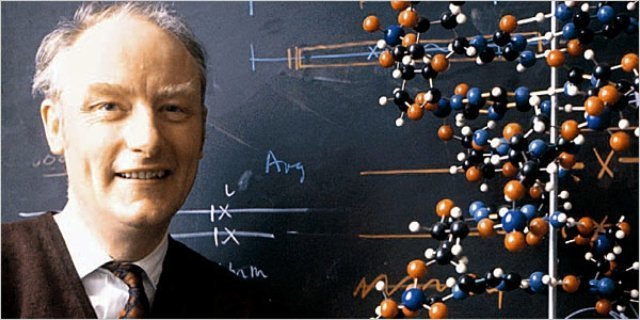 The abrasive and unorthodox Crick and his brilliant American co-researcher James Watson famously celebrated their eureka moment in March 1953 by running from the now legendary Cavendish Laboratory in Cambridge to the nearby Eagle pub, where they announced over pints of bitter that they had discovered the secret of life.

Crick, who died ten days ago, aged 88, later told a fellow scientist that he often used small doses of LSD then an experimental drug used in psychotherapy to boost his powers of thought. He said it was LSD, not the Eagle’s warm beer, that helped him to unravel the structure of DNA, the discovery that won him the Nobel Prize.

Despite his Establishment image, Crick was a devotee of novelist Aldous Huxley, whose accounts of his experiments with LSD and another hallucinogen, mescaline, in the short stories The Doors Of Perception and Heaven And Hell became cult texts for the hippies of the Sixties and Seventies. In the late Sixties, Crick was a founder member of Soma, a legalise-cannabis group named after the drug in Huxley’s novel Brave New World. He even put his name to a famous letter to The Times in 1967 calling for a reform in the drugs laws.

It was through his membership of Soma that Crick inadvertently became the inspiration for the biggest LSD manufacturing conspiracy-the world has ever seen the multimillion-pound drug factory in a remote farmhouse in Wales that was smashed by the Operation Julie raids of the late Seventies.

Crick’s involvement with the gang was fleeting but crucial. The revered scientist had been invited to the Cambridge home of freewheeling American writer David Solomon a friend of hippie LSD guru Timothy Leary who had come to Britain in 1967 on a quest to discover a method for manufacturing pure THC, the active ingredient of cannabis.

It was Crick’s presence in Solomon’s social circle that attracted a brilliant young biochemist, Richard Kemp, who soon became a convert to the attractions of both cannabis and LSD. Kemp was recruited to the THC project in 1968, but soon afterwards devised the world’s first foolproof method of producing cheap, pure LSD. Solomon and Kemp went into business, manufacturing acid in a succession of rented houses before setting up their laboratory in a cottage on a hillside near Tregaron, Carmarthenshire, in 1973. It is estimated that Kemp manufactured drugs worth Pounds 2.5 million an astonishing amount in the Seventies before police stormed the building in 1977 and seized enough pure LSD and its constituent chemicals to make two million LSD ‘tabs’. The arrest and conviction of Solomon, Kemp and a string of co-conspirators dominated the headlines for months. I was covering the case as a reporter at the time and it was then that I met Kemp’s close friend, Garrod Harker, whose home had been raided by police but who had not been arrested. Harker told me that Kemp and his girlfriend Christine Bott by then in jail were hippie idealists who were completely uninterested in the money they were making.

They gave away thousands to pet causes such as the Glastonbury pop festival and the drugs charity Release.

‘They have a philosophy,’ Harker told me at the time. ‘They believe industrial society will collapse when the oil runs out and that the answer is to change people’s mindsets using acid. They believe LSD can help people to see that a return to a natural society based on self-sufficiency is the only way to save themselves.

‘Dick Kemp told me he met Francis Crick at Cambridge. Crick had told him that some Cambridge academics used LSD in tiny amounts as a thinking tool, to liberate them from preconceptions and let their genius wander freely to new ideas. Crick told him he had perceived the double-helix shape while on LSD.

‘It was clear that Dick Kemp was highly impressed and probably bowled over by what Crick had told him. He told me that if a man like Crick, who had gone to the heart of human existence, had used LSD, then it was worth using. Crick was certainly Dick Kemp’s inspiration.’ Shortly afterwards I visited Crick at his home, Golden Helix, in Cambridge.

He listened with rapt, amused attention to what I told him about the role of LSD in his Nobel Prize-winning discovery. He gave no intimation of surprise. When I had finished, he said: ‘Print a word of it and I’ll sue.’