Sex & Psychedelics: Are We Ready to See Through Separation for Good? 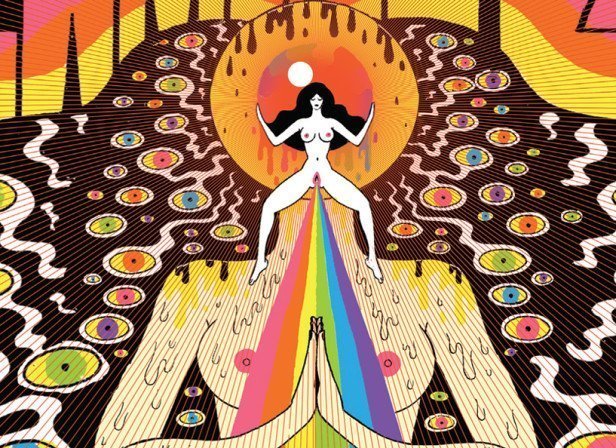 [vc_row][vc_column][vc_column_text]Sex and Psychedelics go together more than bread and butter – we have only buttered bread for maybe thirty thousand years, but archaeology increasingly supports that humans have an intimate relationship with visionary plants and fungi so immensely ancient that it shaped our brains and may have been, in part, responsible for language as we know it.

In rhetorician Richard Doyle’s book, Darwin’s Pharmacy: Sex, Plants, and the Evolution of the Noosphere, he makes a potent argument that DMT-containing vines and “magic” psilocybin mushrooms supercharge our eloquence as we attempt and fail to tell each other what on Earth our trips were like – a kind of wrestling with angels that we cannot win, but betters us by deepening the soulfulness and substance of our lives.

And in these states, the major revelation is that what we take as “self” in ordinary consciousness is woven, folded, fully interpenetrating with the rest of our environments, and everything we say is, in some sense, the speech of the entire universe. So trip reports are, paraphrasing Carl Sagan, the medium through which the cosmos knows itself – and that’s inherently erotic, since communication can blur the boundary between the speaker and the listener, inviting audiences into boundary-dissolving shared experience of what’s already present. (Even when the language of an “I” and “you” appear to reify our separation, language fills “my” head with “someone else’s” thoughts. It forms a bridge between our previously-private universes, and across that bridge my secret world and yours reflect and echo, mixing, one idea distributed between two-seeming bodies that are nonetheless united in the Word.)

Perhaps more tangibly, the research shows that psychedelics temporarily improve a person’s pattern-recognition skills (e.g., detecting words within a block of letters). What more, a federally funded US study from the 1960s demonstrated LSD’s ability to sharpen problem solving skills, enabling scientists to figure out the answers to a set of puzzles that had stumped them just before their guided trips. The more we study them, the more it seems that psychedelics make us smarter – in particular, by boosting lateral associative thought, creative leaps, and our acuity at finding meaning in the noise.

We know from other studies that high scores on overall intelligence tests correlate with healthy sperm, and high IQ is linked to higher sex drive. From The Song of Solomon – one of the oldest and most awesome hyperbolic poems-cum-double entendres (echoed by the lovestruck repartee unfolding in the silly video below) – to Johann Sebastian Bach – who wrote a thousand works of genius music when he wasn’t siring seventeen precocious little Bachs – smarts and sexiness are linked. And musicality, specifically, may confer an evolutionary benefit, because a moving musical performance proves a healthy nervous system. Like flowers luring pollinators into sensual experience and sexual exchange, our eloquence appears to be (in one sense) for seduction.

Sex & Psychedelics: Are We Ready to See Through Separation for Good?

So, when Dr. Leary advocated LSD as both an amplifier of intelligence and sexiness, he pointed toward the truth that brains and genitals aren’t separate things, but North and South of one continuum that bridges not just head and tail but self and other. Smart drugs (nootropics) and their sister, sex drugs (aphrodisiacs), both tear down walls: between the conscious and unconscious mind, between our thoughts and bodies, between imagination and material environment. Psychedelics, as the drug of choice for programmers, provoked the internet and join us in the global project of the World Wide Web – a vast cathedral to the vision of a planetary mind. But all of this – the melting-into-one-another of some good old-fashioned psychedelic sex, and new erotic evolution in the stretching fiber optic cables that digest the borders of our states – it’s just more fumbling at the Great Ineffable, a huge collective trip report that we all write together, trying to reproduce our always- and already-underlying unity by joining what our minds divide with categories.

Yes, the story’s great: we come together as a species, wake the global brain, and build a god, a big apotheosis at the end of history. But history’s already over and it never started, for the ones who recognize that narratives like this are mad abstractions, stabs at making sense of lived experience. What psychedelics teach us – and what we continue to mistranslate in our bid to “bring the world together” – is that nothing’s separate, never was, and all this back-and-forth is sheer creative play: a universe that can, and so it must, explore the sense of being selves and others.

Note: Before you run out looking for heroic doses in the hope of leveling up to “sexy genius” status, please remember that the quest to reunite the self and other is an artifact or symptom of that “optical illusion” of your separation, and that bids like this – by starting from false premises – most often lead to disappointment. Tripping often only amplifies what’s already the case, and if it’s taken up to heal the suffering of selfhood, chances are you’ll only magnify whatever you are trying to escape. And God Forbid you have a revelation while you’re in there! Coming back to ordinary consciousness “initiated,” full of psychic self-importance or faux-humble zealotry just tends to stir the pot of all that same old mental-physical-emotional anxiety and suffering.

That said, the temporary dampening of ego offered by the psychedelic state provides us with a potent opportunity to ask these questions even more precisely than we often might: