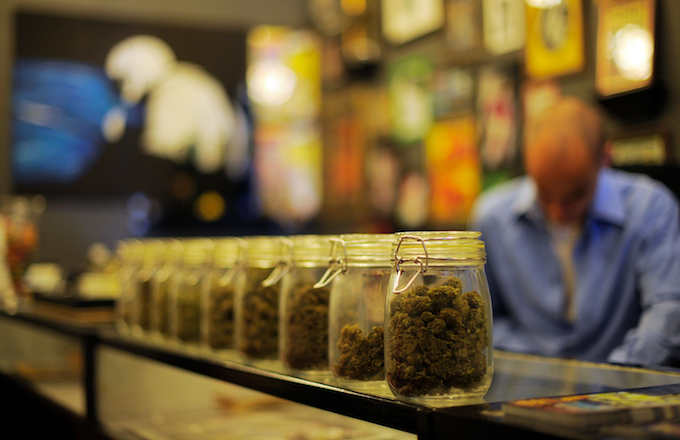 In a radical move, the former presidents of Brazil, Chile, Colombia, Mexico, Poland, Portugal and Switzerland joined hands with political and industrial heavy-weights Kofi Annan, Richard Branson, George Shultz, Paul Volcker and others to foster a paradigm shift in how our world perceives and regulates drugs.

They, the Global Commission on Drug Policy, just published a groundbreaking report “Taking Control: Pathways to Drug Policies that Work” which argues that the War on Drugs has been a colossal failure and something has to change.

“The facts speak for themselves. It is time to change course,” Annan says of the drug war. “We need drug policies informed by evidence of what actually works, rather than policies that criminalize drug use while failing to provide access to effective prevention or treatment. This has led not only to overcrowded jails but also to severe health and social problems.”

Treating drug users as criminals that need to be punished as opposed to patients in need of help only aggravates the problem. Not only does it make integration into society next to impossible, but we also take away both proven therapies to treat addiction and the tools to reduce the risk associated with drug use. Harm reduction and innovative treatment strategies like needle exchange, substitution therapies, heroin prescription and safe consumption rooms have proven to be more safe, effective and less costly than putting users in jail.

“The risks associated with drug use increase, sometimes dramatically, when they are produced, sold and consumed in an unregulated criminal environment,” said Richard Branson.

2. Stop Criminalizing People for Drug Use and Possession

Imposing “compulsory treatment” on people whose only offence is drug use or possession hasn’t been shown to reduce the rate of consumption of drugs. We spend hundreds of millions of dollars to lock away drug users, often targeted minorities, for victimless crimes. This encourages high-risk behaviour such as re-using needles, deters people from seeking medical help, diverts police efforts away from crimes with victims and destroys millions of families haunted by criminal convictions.

While it is known that alcohol and tobacco are one of the most dangerous drugs known to mankind, we can minimize risks with careful, reason-based regulation. There is no reason we can not to the same with currently illicit drugs, beginning with but not limited to cannabis, coca leaf and certain novel psychoactive substances that have proven to be much safer than alcohol and tobacco.
“Regulating the whole chain, from the production to the retail of drugs, allows to rollback criminal organizations, secure quality standards and protect people’s life, health and safety.” said former Swiss president Ruth Dreifuss.

There are many domestic and international obstacles to getting medicine to people in need. Many psycho-active substances that have been proven to treat PTSD, social anxiety, addiction and depression are banned and it is estimated 80% of the world population can’t access pain relief medication because of our current drug laws.

5. Focus on Reducing the Power of Criminal Organizations

Prohibition doesn’t diminish overall drug consumption but instead forces the drug trade into unregulated underground markets, often in the hands of violent drug cartels. Prices surge up dramatically, now estimated to be in the hundreds of billions, giving more incentive for cartels to increase drug consumption and addiction. The huge profits made fuels a constant violent struggle against market competition and the state, which trickles down to citizens and corrupts the democratic legal order. Taxing a regulated drug market will bring safer and cheaper substances to users while keeping the profits to benefit society.

“Decriminalization of drug consumption is certainly crucial but not sufficient. Significant legal and institutional reforms, both at the national and international levels, are needed to allow governments and societies to put in place policies to regulate the supply of drugs with rigorous medical criteria, if the engines of organized crime profiting from drug traffic are to be truly dismantled.” said former President of Mexico Ernesto Zedillo.

In 2016 the United Nation (UN) will hold another General Assembly Special Session (UNGASS) on Drugs and the commission expects their suggestions to have a strong impact. The last UN meeting on drugs was in 1998 and called for a drug-free world and set a myriad of unrealistic goals.

“We are driven by a sense of urgency. There is a widespread acknowledgement that the current system is not working, but also recognition that change is both necessary and achievable. We are convinced that the 2016 United Nations General Assembly Special Session (UNGASS) is a historic opportunity to discuss the shortcomings of the drug control regime, identify workable alternatives and align the debate with ongoing debates on the post-2015 development agenda and human rights.” said Fernando Henrique Cardoso, the Former President of Brazil.

The proposals outlined in this monumental report are policies based on knowledge, compassion, health and human rights and can, therefore, be seen as a truly significant milestone in history. As the report argues, we need to move away from political rhetoric that pushes destructive agendas and stigmatizes drug users, and focus instead on an all-inclusive harm reduction program which sees the change of one’s own consciousness, whether with or without drugs, as a fundamental right.