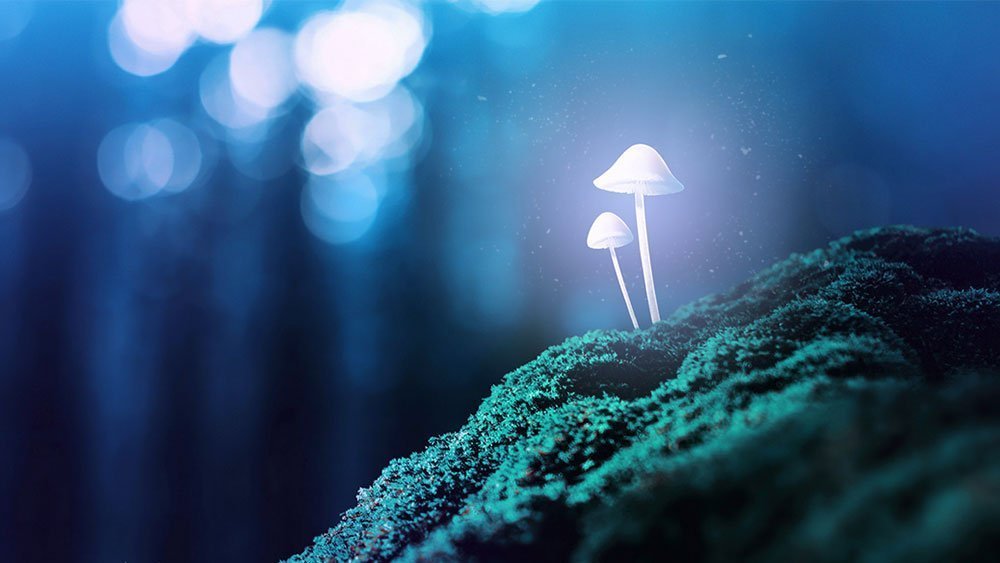 At first glance, Psilocybe cubensis doesn’t look particularly magical. In fact, the scientific name of this little brown-and-white mushroom roughly translates to “bald head,” befitting the fungus’s rather mild-mannered appearance. But those who have ingested a dose of P. cubensis say it changes the user’s world.

The mushroom is one of more than 100 species that contain compounds called psilocybin and psilocin, which are psychoactive and cause hallucinations, euphoria and other trippy symptoms.

These “magic mushrooms” have long been used in Central American religious ceremonies, and are now part of the black market in drugs in the United States and many other countries, where they are considered a controlled substance.

How does a modest little mushroom upend the brain so thoroughly? Read on for the strange secrets of ‘shrooms.

The compounds in psilocybin mushrooms may give users a “mind-melting” feeling, but in fact, the drug does just the opposite —  psilocybin actually boosts the brain’s connectivity, according to an October 2014 study. Researchers at King’s College London asked 15 volunteers undergo brain scanning by a functional magnetic resonance imaging (fMRI) machine. They did so once after ingesting a dose of magic mushrooms, and once after taking a placebo. The resulting brain connectivity maps showed that, while under the influence of the drug, the brain synchronizes activity among areas that would not normally be connected. This alteration in activity could explain the dreamy state that ‘shroom users report experiencing after taking the drug, the researchers said.

‘Shrooms act in other strange ways upon the brain. Psilocybin works by binding to receptors for the neurotransmitter serotonin. Although it’s not clear exactly how this binding affects the brain, studies have found that the drug has other brain-communication-related effects in addition to increased synchronicity.

In one study, brain imaging of volunteers who took psilocybin revealed decreased activity in information-transfer areas such as the thalamus, a structure deep in the middle of the brain. Slowing down the activity in areas such as the thalamus may allow information to travel more freely throughout the brain, because that region is a gatekeeper that usually limits connections, according to the researchers from Imperial College London.

Central Americans were using psilocybin mushrooms before Europeans landed on the New World’s shores; the fantastical fungi grow well in subtropical and tropical environments. But how far back were humans tripping on magic mushrooms?

It’s not an easy question to answer, but a 1992 paper in the short-lived journal, “Integration: Journal of Mind-Moving Plants and Culture,” argued that rock art in the Sahara dating back 9,000 years depicts hallucinogenic mushrooms. The art in question shows masked figures holding mushroomlike objects. Other drawings show mushrooms positioned behind anthropomorphic figures — possibly a nod to the fact that mushrooms grow in dung. (The mushroom figures have also been interpreted as flowers, arrows or other plant matter, however, so it remains an open question whether the people who lived in the ancient Sahara used ‘shrooms.)

Rush said that Siberian shamans used to bring gifts of hallucinogenic mushrooms to households each winter. Reindeer were the “spirit animals” of these shaman, and ingesting mushrooms might just convince a hallucinating tribe member that those animals could fly. Plus, Santa’s red-and-white suit looks suspiciously like the colors of the mushroom species Amanita muscaria, which grows — wait for it — under evergreen trees. However, this species is toxic to people.

Feeling like you’ve just taken a bad trip? Not to worry. Not all anthropologists are sold on the hallucinogen-Christmas connection. But still, as Carl Ruck, a classicist at Boston University, told Live Science in 2012: “At first glance, one thinks it’s ridiculous, but it’s not.”

5. ‘Shrooms may change people for good
Psychologists say that few things can truly alter someone’s personality in adulthood, but magic mushrooms may be one of those things.

A 2011 study found that after one dose of psilocybin, people became more open to new experiences for at least 14 months, a shockingly stable change. People with open personalities are more creative and more appreciative of art, and they value novelty and emotion.

The reason for the change seems to be psilocybin’s effects on emotions. People describe mushroom trips as extremely profound experiences, and report feelings of joy and connectedness to others and to the world around them. These transcendent experiences appear to linger. (In the experiments, the researchers took great pains to assure their participants did not experience “bad trips,” as some people respond to psilocybin with panic, nausea and vomiting. Volunteers were kept safe in a room with peaceful music and calming surroundings.)

6. Mushrooms kill fear
Another strange side effect of magic mushrooms: They destroy fear. A 2013 study in mice found that when dosed with psilocybin, the animals became less likely to freeze up when they heard a noise they had learned to associate with a painful electric shock. Mice that were not given the drug also gradually relaxed around the noise, but it took longer.

7. They make their own wind
Mushrooms don’t just exist to get people high, of course; they have their own lives. And part of that life is reproduction. Like other fungi, mushrooms reproduce via spores, which travel the breeze to find a new place to grow.

But mushrooms often live in sheltered areas on forested floors, where the wind doesn’t blow. To solve the problem of spreading their spores, some ‘shrooms (including the hallucinogenic Amanita muscaria) create their own wind. To do this, the fungi increase the rate that water evaporates off of their surfaces, placing water vapor in the air immediately around them. This water vapor, along with the cool air created by evaporation, works to lift spores. Together, these two forces can lift the spores up to 4 inches (10 centimeters) above the mushroom, according to a presentation at the 2013 meeting of the American Physical Society’s Division of Fluid Dynamics.

8. Many mushrooms
At least 144 species of mushroom contain the psychoactive ingredient psilocybin, according to a 2005 review in the International Journal of Medicinal Mushrooms. Latin America and the Caribbean are home to more than 50 species, and Mexico alone has 53. There are 22 species of magic mushroom in North America, 16 in Europe, 19 in Australia and the Pacific island region, 15 in Asia, and a mere four in Africa.

9. Experimenting with ‘shrooms
Recently, researchers have begun to experiment with psilocybin as a potential treatment for depression, anxiety and other mental disorders. This line of research was frozen for decades and is still difficult to pursue, given psilocybin’s status as a Schedule I substance. This means the drug is classified by the Drug Enforcement Administration (DEA) as having no accepted medical use and a high potential for abuse.

In the past, though, psilocybin and other hallucinogenic drugs were at the center of a thriving research program. During the 1960s, for example, Harvard psychologist Timothy Leary and his colleagues ran a series of experiments with magic mushrooms called the Harvard Psilocybin Project. Among the most famous was the Marsh Chapel Experiment, in which volunteers were given either psilocybin or a placebo before a church service in the chapel. Those who got psilocybin were more likely to report a mystical spiritual experience. A 25-year follow-up in 1991 found that participants who got the psilocybin remembered feeling even more unity and sacredness than they said they’d felt six months after the fact. Many described the experience as life altering.

“It left me with a completely unquestioned certainty that there is an environment bigger than the one I’m conscious of,” one told the researchers in 1991. “I have my own interpretation of what that is, but it went from a theoretical proposition to an experiential one. … Somehow, my life has been different knowing that there is something out there.”

10. The counterculture cultivator
Leary’s psychedelic experiments are part of hippie lore, but the man who did the most to bring magic mushrooms to mainstream U.S. drug culture was a writer and ethnobotanist named Terence McKenna. He had been experimenting with psychedelics since his teen years, but it wasn’t until a trip to the Amazon in 1971 that he discovered psilocybin mushrooms — fields of them, according to a 2000 profile in Wired magazine.

In 1976, McKenna and his brother published “Psilocybin: Magic Mushroom Grower’s Guide,” a manual for cultivating psilocybin mushrooms at home. “What is described is only slightly more complicated than canning or making jelly,” McKenna wrote in the foreword to the book.

11. Animals feel the effects
Psilocybin ‘shrooms grow in the wild, so it’s perhaps inevitable that nonhuman animals have sampled these trippy fungi. In 2010, the British tabloids were abuzz with reports that three pygmy goats at an animal sanctuary run by 1960s TV actress Alexandra Bastedo had gotten into some wild magic mushrooms. The goats reportedly acted lethargic, vomited and staggered around, taking two days to fully recover.

Siberian reindeer also have a taste for magic mushrooms, according to a 2009 BBC nature documentary. It’s unclear whether the reindeer feel the effects, but Siberian mystics would sometimes drink the urine from deer that had ingested mushrooms in order to get a hallucinogenic experience for religious rituals.