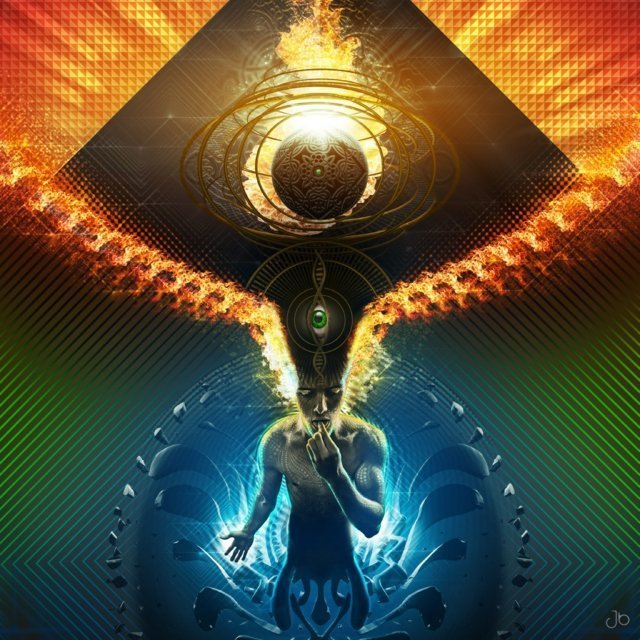 New research shows that our brain displays a similar pattern of activity during dreams as it does during a mind-expanding drug trip.

Psychedelic drugs such as LSD and magic mushrooms can profoundly alter the way we experience the world but little is known about what physically happens in the brain. New research, published in Human Brain Mapping, has examined the brain effects of the psychedelic chemical in magic mushrooms, called psilocybin, using data from brain scans of volunteers who had been injected with the drug.

The study found that under psilocybin, activity in the more primitive brain network linked to emotional thinking became more pronounced, with several different areas in this network — such as the hippocampus and anterior cingulate cortex — active at the same time. This pattern of activity is similar to the pattern observed in people who are dreaming. Conversely, volunteers who had taken psilocybin had more disjointed and uncoordinated activity in the brain network that is linked to high-level thinking, including self-consciousness.

Psychedelic drugs are unique among other psychoactive chemicals in that users often describe ‘expanded consciousness,’ including enhanced associations, vivid imagination and dream-like states. To explore the biological basis for this experience, researchers analysed brain imaging data from 15 volunteers who were given psilocybin intravenously while they lay in a functional magnetic resonance imaging (fMRI) scanner. Volunteers were scanned under the influence of psilocybin and when they had been injected with a placebo.

“What we have done in this research is begin to identify the biological basis of the reported mind expansion associated with psychedelic drugs,” said Dr Robin Carhart-Harris from the Department of Medicine, Imperial College London. “I was fascinated to see similarities between the pattern of brain activity in a psychedelic state and the pattern of brain activity during dream sleep, especially as both involve the primitive areas of the brain linked to emotions and memory. People often describe taking psilocybin as producing a dream-like state and our findings have, for the first time, provided a physical representation for the experience in the brain.”

Brain activity under psilocybin with a decrease (blue) in evolutionary advanced brain regions and an increase (orange) in memory and emotion centres. Credit: Image courtesy of Imperial College London

The new study examined variation in the amplitude of fluctuations in what is called the blood-oxygen level dependent (BOLD) signal, which tracks activity levels in the brain. This revealed that activity in important brain networks linked to high-level thinking in humans becomes unsynchronised and disorganised under psilocybin. One particular network that was especially affected plays a central role in the brain, essentially ‘holding it all together’, and is linked to our sense of self.

In comparison, activity in the different areas of a more primitive brain network became more synchronised under the drug, indicating they were working in a more co-ordinated, ‘louder’ fashion. The network involves areas of the hippocampus, associated with memory and emotion, and the anterior cingulate cortex which is related to states of arousal.

Lead author Dr Enzo Tagliazucchi from Goethe University, Germany said: “A good way to understand how the brain works is to perturb the system in a marked and novel way. Psychedelic drugs do precisely this and so are powerful tools for exploring what happens in the brain when consciousness is profoundly altered. It is the first time we have used these methods to look at brain imaging data and it has given some fascinating insight into how psychedelic drugs expand the mind. It really provides a window through which to study the doors of perception.”

Dr. Carhart-Harris added: “Learning about the mechanisms that underlie what happens under the influence of psychedelic drugs can also help to understand their possible uses. We are currently studying the effect of LSD on creative thinking and we will also be looking at the possibility that psilocybin may help alleviate symptoms of depression by allowing patients to change their rigidly pessimistic patterns of thinking. Psychedelics were used for therapeutic purposes in the 1950s and 1960s but now we are finally beginning to understand their action in the brain and how this can inform how to put them to good use.”

The data was originally collected at Imperial College London in 2012 by a research group led by Dr Carhart-Harris and Professor David Nutt from the Department of Medicine, Imperial College London. Initial results revealed a variety of changes in the brain associated with drug intake. To explore the data further Dr. Carhart-Harris recruited specialists in the mathematical modelling of brain networks, Professor Dante Chialvo and Dr Enzo Tagliazucchi to investigate how psilocybin alters brain activity to produce its unusual psychological effects.

As part of the new study, the researchers applied a measure called entropy. This was originally developed by physicists to quantify lost energy in mechanical systems, such as a steam engine, but entropy can also be used to measure the range or randomness of a system. For the first time, researchers computed the level of entropy for different networks in the brain during the psychedelic state. This revealed a remarkable increase in entropy in the more primitive network, indicating there was an increased number of patterns of activity that were possible under the influence of psilocybin. It seemed the volunteers had a much larger range of potential brain states that were available to them, which may be the biophysical counterpart of ‘mind expansion’ reported by users of psychedelic drugs.

Previous research has suggested that there may be an optimal number of dynamic networks active in the brain, neither too many nor too few. This may provide evolutionary advantages in terms of optimising the balance between the stability and flexibility of consciousness. The mind works best at a critical point when there is a balance between order and disorder and the brain maintains this optimal number of networks. However, when the number goes above this point, the mind tips into a more chaotic regime where there are more networks available than normal.

Collectively, the present results suggest that psilocybin can manipulate this critical operating point.

The research was funded and intellectually supported by the Beckley Foundation. Professor Chialvo is from the Consejo Nacional de Investigaciones Cientificas y Tecnologicas (CONICET), Argentina and Dr Tagliazucchi is based at Goethe University, Germany.