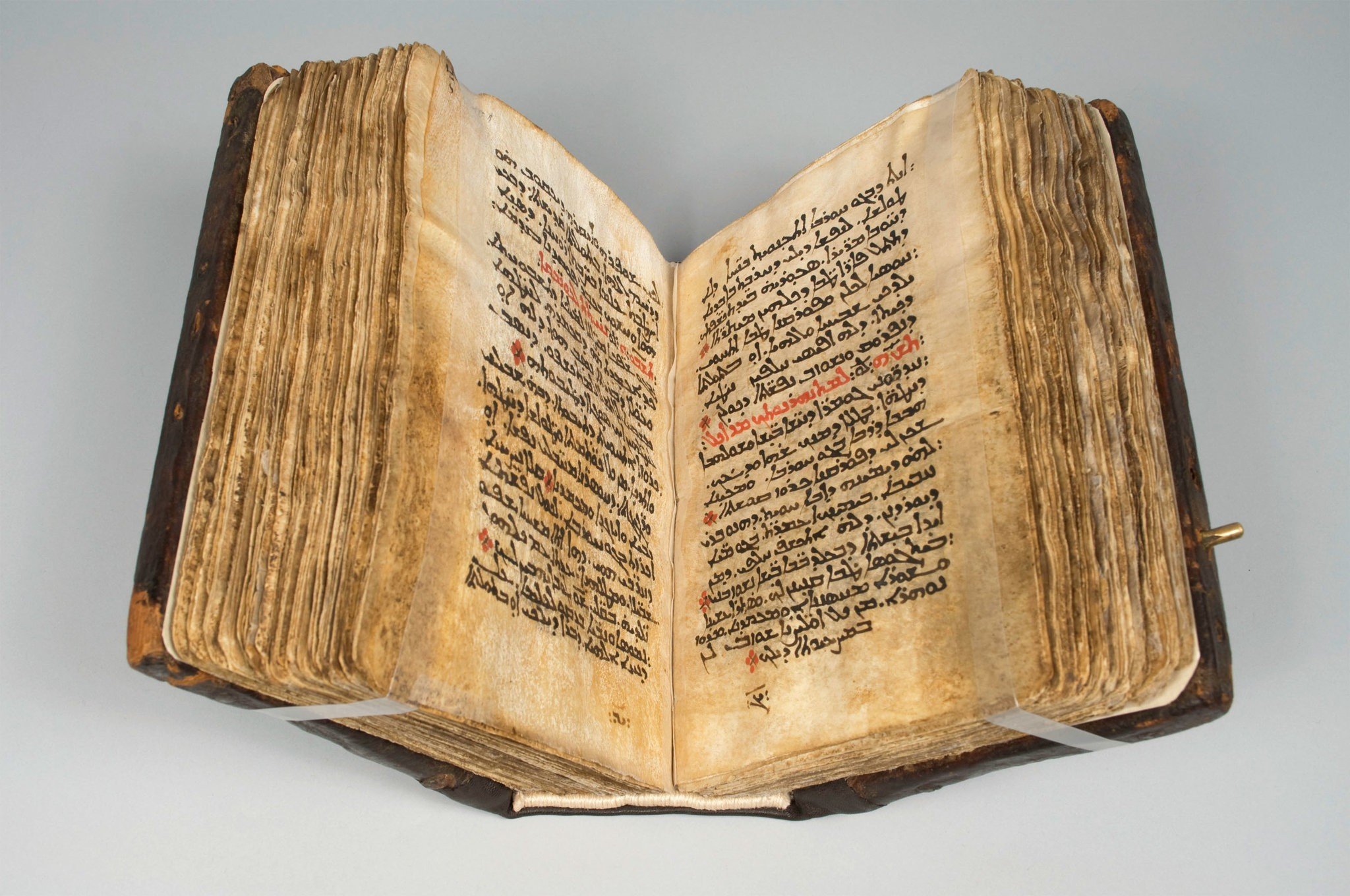 A Syriac scholar at Philipps University in Marburg, Germany, Dr. Kessel was sitting in the library of the manuscript’s owner, a wealthy collector of rare scientific material in Baltimore. At that moment, Dr. Kessel realized that just three weeks earlier, in a library at Harvard University, he had seen a single orphaned page that was too similar to these pages to be a coincidence.

The manuscript he held contained a hidden translation of an ancient, influential medical text by Galen of Pergamon, a Greco-Roman physician and philosopher who died in 200 A.D. It was missing pages and Dr. Kessel was suddenly convinced that one of them was in Boston.

Dr. Kessel’s realization in February 2013 marked the beginning of a global hunt for the other lost leaves, a search that culminated in May with the digitization of the final rediscovered page in Paris. Scholars are just beginning to pore over the text, the oldest known copy of Galen’s “On the Mixtures and Powers of Simple Drugs.” It may well provide new insights into medicine’s roots and into the spread of this new science across the ancient world.

“On so many levels it’s important,” said Peter Pormann, a Graeco-Arabic expert at the University of Manchester who now leads a study of the text.

The manuscript held by Dr. Kessel that day was a palimpsest: older text covered up by newer writing. It was a common practice centuries ago, a medieval form of recycling. In this case, 11th-century Syrian scribes had scraped away Galen’s medical text and had overwritten hymns on the parchment.

The hymn book itself is of interest, but for now, it is the original text, all but invisible to the naked eye and known as the undertext, that has captured the imagination of scholars. One leaf of the Syriac Galen Palimpsest remains at St. Catherine’s in the Sinai Desert in Egypt, which has the world’s oldest continuously operating library.MARK SCHROPE

For centuries, Galen’s “Simple Drugs” was required reading for aspiring physicians, the summation of ancient knowledge about medicine, patient care and pharmaceutical plants. Galen described a root that cures “roughness of the throat” and recommended hemp as an earache remedy that “does not produce flatulence” (though it “dries out the semen”).

Much of “Simple Drugs” was eventually translated into Syriac, a form of Aramaic used by Middle Eastern Christian communities. The undertext of the manuscript in Baltimore, most likely from the ninth century A.D., is a copy of the first Syriac translation, itself painstakingly completed in the sixth century A.D. by Sergius of Reshaina, a Syriac physician and priest.

“Today, it doesn’t look to be special when somebody translates one language to another, but in those days, it was indeed a great achievement,” Dr. Kessel said. “He had to create a vocabulary, to find Syriac words to correspond to this Greek medical vocabulary.”

By the sixth century, Syriac-speaking Christians were spreading east from Turkey through Syria, Iraq and Iran. They needed translations of Greek scholarly work, partly to support missionary work like running hospitals. “Simple Drugs” was a large work, an 11-book treatise. Sergius’s translations of Galen’s text were copied and recopied for centuries, and eventually became a bridge for moving the medical expertise of the ancient Greeks to Islamic societies. Syriac texts were much easier than Greek ones to translate into Arabic.

As Muslim influence grew in the Near and Middle East, Christian populations dwindled, and so did Syriac. “These great Christian cultures that used it suffered so much,” said Columba Stewart, the executive director of the Hill Museum and Manuscript Library in Collegeville, Minn.

“By the time you have a modern scholarship, these ancient Syriac cultures are just a vestige of their former selves — often quite isolated from Western culture, so there’s not a lot of awareness.” The librarian at St. Catherine’s examining an ancient text.CreditMark Schrope

Little is known of the history of the manuscript in Baltimore, formally known as the Syriac Galen Palimpsest, from its recycling in the 11th century until the 1920s, when it was sold to a private collector in Germany. After that, the manuscript fell again from public view until 2002, when it was purchased by a collector in a private sale. He has not been publicly identified.

In 2009, the Galen Palimpsest was lent to the Walters Art Museum for spectral imaging of its leaves by an independent group of specialists, which would reveal the erased Galen undertext. Each page is photographed digitally at extremely high resolution with varying colours and configurations of light, which in various ways illuminate the inks, grooves from writing and parchment itself. Computer algorithms exploit these variations to maximize the visibility of the undertext.

The resulting images went online under a “creative commons” license, meaning that anyone can use the material free for any non-commercial purpose. Once the images were online, William Noel, who was the curator of manuscripts and rare books at the museum, began organizing members of the tiny community of scholars who study Syriac scientific texts to study the new material.

One of them was Dr. Kessel, who was on a fellowship at Harvard’s Dumbarton Oaks Research Library in Washington. Eventually, Michael B. Toth, a systems engineer who managed the imaging work arranged for him to see the Galen Palimpsest for himself. The bound Syriac Galen Palimpsest.CreditCourtesy of the Owner

“I couldn’t even imagine how it looked,” Dr. Kessel said. “Then when I saw the manuscript, I had the kind of déjà vu impression that I had already seen it. And then I recalled the single folio in the Harvard library.”

By analyzing the page size, handwriting and other features, as well as the visible text, Dr. Kessel was able to determine that the Harvard leaf did indeed fill one of the gaps in the Galen Palimpsest. But six more were apparently missing. Dr. Kessel set out to find them.

He began with a list of 10 libraries known to have ancient Syriac material, combing through online catalogues when available to look for clues such as the right dimensions or vague references to undertext. Sometimes, he travelled to the libraries himself.

It was not long before Dr. Kessel had good news. He found one missing page in a catalogue from the Sacred and Imperial Monastery of the God-Trodden Mount of Sinai. It is known more commonly as St. Catherine’s in the Sinai Desert in Egypt, which has the world’s oldest continuously operating library.

Another leaf turned up at the National Library of France in Paris. And at the Vatican’s vast library in Rome, he was able to identify the other three missing leaves, bringing the total to six.
The seventh missing page is believed to have been blank and was probably discarded.

No one knew how much of ”Simple Drugs” might be hidden in the Galen Palimpsest. The only other known Syriac copy resides at the British Library in London and includes only Books 6 to 8. Translations of these later books in the series are the most common because they contain more specific medicinal information and details about the properties of plants.

But as their preliminary studies progressed, Dr. Kessel and his colleagues spotted words from Books 2 and 4 in one of the loose leaves. The full text of “Simple Drugs” is known to scholars, but only from more recent translations in languages other than Syriac.

“This was something absolutely unexpected,” he said.

Siam Bhayro, a specialist in early Jewish studies at the University of Exeter in England, had believed that Sergius must have translated the earlier books, but there had been no proof. When he heard that Dr. Kessel might have found pages from the early translations, “I was almost dancing up and down,” he said.

Another of Dr. Kessel’s intriguing discoveries was a note in Arabic on the first leaf, indicating that the manuscript — by then a hymn book concealing Galen’s text — had been donated to the brothers of the Sinai monastery, a reference to St. Catherine’s.

How it left the monastery is unclear: Particularly in the early 20th century, some of the library’s holdings were borrowed legitimately, while others were stolen by visitors hoping to make private sales.

The independent imaging team is now finishing the work necessary to add the rediscovered leaves to the digital collection. But translating and studying the Syriac text revealed in the images will take much longer, perhaps five years or more. That work is now underway because of a recent $1.5 million grant from the United Kingdom’s Arts and Humanities Research Council.

Scholars are eager to compare the Syriac material to existing copies of “Simple Drugs” written in Greek, all of which appear to be centuries younger than the Galen Palimpsest and much further removed from the original.

As texts went through multiple rounds of copying, they underwent significant changes. A scribe might remove parts that seemed unimportant or add material based on new knowledge. Comparing the Galen Palimpsest and the British Syriac copy, for instance, could offer telling insights into how the ancient Greeks treated the ill and how these remedies spread across the Middle East.

“Some of the stuff is not entirely scientific by our standards,” even if it enabled progress, Dr. Petit said. Indeed, little of Galen’s advice would stand up to modern scrutiny. Like other ancient physicians, he believed health was controlled by the balance of four “senses of humour” in the body and recommended certain stones for their cleansing powers.

Still, it was the best thinking available in an era in which the very idea of medical science was relatively new.

“It’s likely to be a central text once it’s fully deciphered,” said Dr. Pormann of the University of Manchester. “We might discover things we really can’t dream of yet.”