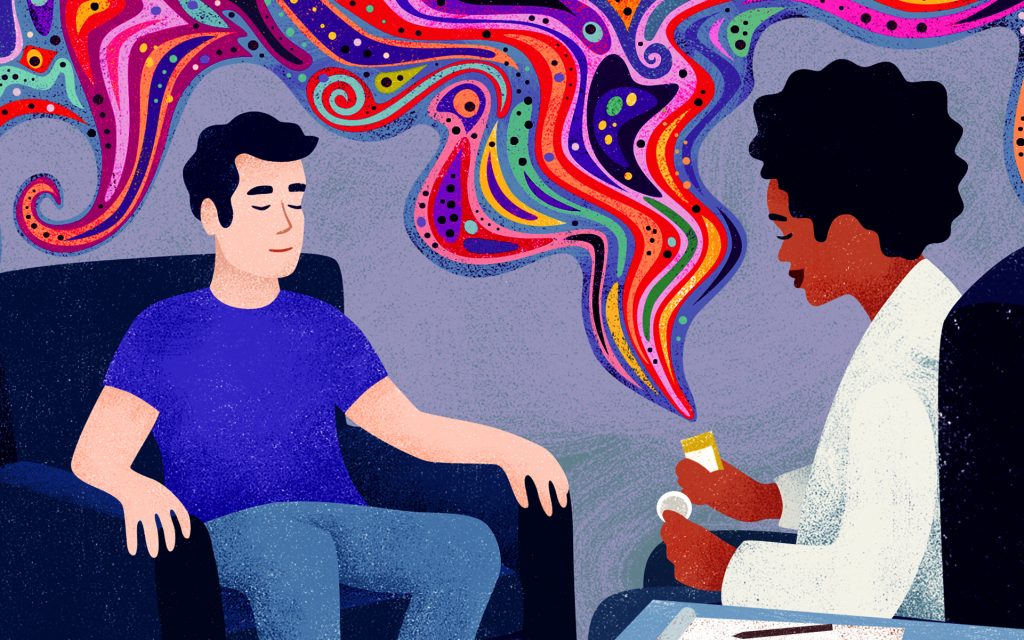 Salvia divinorum is a perennial Mexican herb from the labiate (mint) family (Epling & Jativa, 1962) that has a history of use chiefly for the initiation and facilitation of shamanic practice among such peoples as the Mazatec Indians of the Sierra Mazateca region of Oaxaca, Mexico, and possibly by earlier human civilizations (Johnson, 1939; Wasson, 1962; Ott, 1995). In its capacity as a tool of divination, the predominant known use of this plant (aside from general problem solving, such as finding lost objects) occurred in the context of healing ceremonies, for the treatment of disease.

Typically, these healing rituals involved the oral consumption of large doses (50-100 leaves) of the plant in order to induce altered states of consciousness that fostered the detection of specific ailments. Significantly, the means of such identification of a specific condition was often through self-report. The Mazatec Indians, who referred to this herb by a number of names, most commonly ‘ska Maria pastora’ (‘leaves of the Virgin Mary, the Shepherdess’), also employed this plant medicinally for the management of such conditions as headache, diarrhoea, rheumatism and anaemia (Valdez, Diaz & Paul, 1983). Recent investigations have isolated the neoclerodane diterpenes Salvinorin A, B and C as the main constituents (Ortega, Blount & Manchand, 1982; Valdez et al., 2001; Roth et al., 2002), and the psychoactivity of this herb, identified by earlier investigators (Wasson, 1962), has been clearly delineated only recently (Siebert, 1994). Like other plant substances (e.g. nutmeg) and many prescription medications (e.g. belladonna alkaloids), there may be considerable variation in the psychoactivity of Salvia divinorum depending on dosage and method of ingestion. Oral consumption of Salvia divinorum requires that the herb material be brought into extended contact with the oral mucosa (held in the mouth for 15-30 minutes), producing significant effects lasting up to an hour.

In December, 1997, following discussions some months earlier concerning the possible healing potential of various plant substances in psychiatric conditions, a treatment-resistant depressed patient (Ms. G) under the care of the author reported the serendipitous management of her symptoms of depression with use of Salvia divinorum obtained via a mail-order herbal supplier (Hanes, 2001). Despite initial caution, the author has treated several patients with refractory (or treatment-resistant) depression since that time, adapting to varying circumstances and requirements the broad protocol followed by Ms. G in the self-management of her symptoms of depression, namely oral dose of 2-3 Salvia divinorum leaves (1/2 to 3/4 of a gram of leaf material) three times per week. Prior to the prohibition of Salvia divinorum in Australia in June 2002, I had introduced the herb to six additional patients, five of whom have provided valuable feedback regarding their use. I have also had contact with over 20 individuals from around the world who report beneficial effects of this herb in their lives, including relief from depressive symptoms.

Although it is too early to draw definitive conclusions regarding the antidepressant potential of Salvia divinorum, initial results are promising, with the majority of patients reporting lasting benefits from their use of this herb. In addition to significantly reduced scores on quantitative measures of depression, some of the reported benefits of the herb include mood enhancement and increased feelings of relaxation and self-awareness. In the case of a severely depressed 24-year old patient, who has since discontinued use of the herb, the use of Salvia divinorum over several months stimulated an ongoing interest in meditation and hypnogogic/hypnopompic states. The author has received no reports of any deleterious effects arising from the use of this herb. Only occasional feelings of ‘lightheadedness’ have been reported as a side effect, with some patients also expressing dislike for the bitter flavor of the leaf material.

Among the initial barriers to such work is the lack of availability of Salvia divinorum in a standardised form, the relative sparsity of refractory depression cases, the difficulty controlling for the possible benefits of self-administered larger doses of the herb, and the apparent differential sensitivity of patients to the herb’s effects. Notably, the emphasis in this work thus far has been largely on patient management, and not on producing results, even if this were possible, commensurate with a clinical trial.

Finally, several patients have reported benefits of a broadly ‘psychospiritual’ quality from their unsanctioned occasional use of larger doses of this herb, incorporating such experiences as loss of body awareness (e.g. becoming numbers, household objects), being present in an alternate reality, ineffability (difficulty describing the experience with words), nature mysticism, and increased intuitive insight (Hanes, 2001). These experiences certainly fall outside the parameters of mainstream mental health practice. However, the personal growth and healing significance of integrating such experiences into the lives of those bearing such symptoms as hopelessness, worthlessness, loss of interest/pleasure in all activities and difficulty finding ‘meaning’ in their lives cannot be underestimated.

The use of plant substances for the treatment of depression has a long history in herbal medicine, and herbs such as St John’s Wort are now well recognised treatments for this condition (Linde et al., 1996). Given also that there is an extensive literature supporting the use of psychedelic agents in psychiatric conditions, including depression (see Riedlinger & Riedlinger, 1994 for a review), it would not be surprising that herbs demonstrating short-acting and unique psychoactivity, such as Salvia divinorum, may find some application in this broad interface between such disciplines as psychiatry, psychopharmacology and herbal medicine.

In terms of future directions, exploring the effect of this herb on specific receptor and neurobehavioural systems (eg. Ukai, Suzuki & Mamiya, 2002), and its propensity to uncover underlying emotional or psychic conflicts, consistent with its traditional use to detect illness, also merits study. Furthermore, this herb demonstrates a very broad and unique spectrum of psychoactivity, ranging from very mild ‘mood-altering effects’ to purportedly more profound experiences such as 1) ‘becoming objects’, suggesting possible overlap with such attainments of yoga practice as ‘samadhi’ or ‘enstasy’ (see Eliade, 1969); 2) ‘psychospiritual experiences’ (Hanes, 2001); and 3) out-of-body experiences (Siebert, 1994). Correspondingly, the future prospects for this herb may extend beyond its clinical use for conditions such as refractory depression toward the unfoldment of human potential (Walsh & Vaughan, 1993; Tart, 1997).