The Revolutionary Potential of Psychedelics 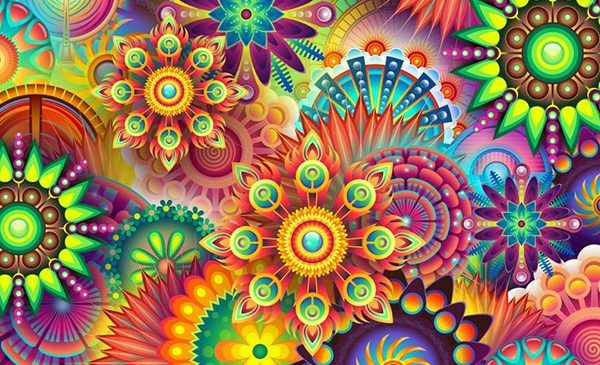 Psychedelic substances are resurging into the popular culture in ways unrivaled since the starry-eyed, long-haired baby boomers of the 1960’s dropped acid and discovered peace and promiscuity. However, today’s generation of visionary psychonauts are making a much more measured movement to the mainstream than the hundred thousand hippies who descended on San Francisco in 1967’s summer of love. While they were encouraged to “turn on, tune in, and drop out” by revolutionary ex-Harvard scientist turned LSD evangelist Timothy Leary, modern proponents such as philosopho-comedian Joe Rogan and alternative archeology researcher Graham Hancock feel quite a bit more level headed, and dare I say credible, in their advocation of these consciousness bending chemicals.

Hints of revolution seem almost part and parcel with the transformative potential psychedelics undoubtedly yield, yet today these hints seem slightly less radical, and far more deeply connected to a realization of individual emotional growth, as well as social and personal maturity. Before being cast as deadly outlaws and lumped in with speed and heroin by Richard Nixon’s cocksure ‘war on drugs’, psychedelics like LSD and magic mushrooms were making waves as powerful new tools in the psychological community’s toolbox.

Today’s arsenal of dubiously effective, chronically administered, and arguably soul-crushing amphetamines and serotonin manipulating zombification pills are given to adults and children alike for everything from sadness to boredom. In contrast, these psyche-hacking shamanic medicines can often produce positive and lasting changes in just a few doses. A small, yet strong and growing body of research, as well as a poignant parade of personal anecdotes, are continuously demonstrating their therapeutic benefit for such tough nuts to crack as post traumatic stress disorder, anti-social tendencies, addiction, and fear of death. All of this as the fire and brimstone predictions peddled by the DEA and classroom DARE programs prove themselves decidedly overblown. The Multidisciplinary Association for Psychedelic Studies (or MAPS), is a non-profit organization that is leading the charge in a new wave of studies, picking up from and offering validation to the work of those fringe 1960’s researchers who saw the potential boon psychedelics could yield in our creative, spiritual, and interpersonal lives.

Psychedelics, like intense meditation or spiritual practices, can hyper-subjectify reality, meaning that they intensify experience in a way that potentiates a myriad of information streams that are not necessarily dependent on any kind of sensory input. The results are always exceedingly unique, but it is the similarities I find most interesting. The kinds of effects that are useful in a therapists office include increased emotional clarity, openness to new perspectives, and ruthless self-examination. Telepathic or other paranormal experiences, as well as reported contacts with beings, extra-terrestrial or extra-dimensional, demon or deity, are also common, especially at higher doses. As are unitive, ego-shredding, or samādhi-like experiences, in which the apparent separation between subject and object dissolves, and one feels their sense of self expanded to contain the cosmos.

The kinds of truths discerned during these experiences are rarely empirically verifiable, yet are often deeply impactful and can’t be easily separated from the observed clinical effects. Often those transformations are intricately tied to understandings reached during these more mystical moments. An argument exists, and may not be easily solved, between whether the many compelling structural similarities give us a more fundamental insight into the nature of such mystical experiences than the seemingly endless amounts of detailed variation. Are they are a kind of metaphorical imagineering of the self, externalized and projected outward, or do they point to a more foundational ontological reality?

My own relatively mild-mannered journeys into psychedelic space have certainly provided me with valuable personal insight into some of my more problematic emotional and belief patterns, and have in many ways left me humbled. Perhaps above all else, I am recovering from the deathly ego trap of believing that in more than one area, we humans had pinned reality down, had forced it to tap out and yield us knowledge of ‘the truth’. I also felt that people who did not see and accept that were, by definition, irrational. The extraordinary nature of my trips has forced me to question some basic assumptions about what it is that I, or we, can know. Objectivity, that holy ideal, seems now merely an attractive mirage, that when grasped at has actually left me stumbling and clutching air as it reappeares across the room.

Let me be clear, this is not an endorsement of the flighty choose-your-own-reality philosophical anti-framework of the extremist new age relativists. It is a recognition of the inherent limitations we face as observers, forever trapped by the nature of experience itself behind an impenetrable barrier of subjectivity. It is a denouncement of the not-objective-therefore-hallucination reductionism ad-absurdum of the materialist minded demagogues. It is an attempt to strike that balance between being open-minded and sufficiently cautious to which both the sceptical mafia and the woo-peddling charlatans pay lip service while each performing the gymnastic double backflip of authoritative appeals to the consensus of scientists or the wisdom of gurus. What stands between these two extremes is a little hard, at first, to suss out.

Tim Leary thought we could use psychedelics to level-up our consciousness and ‘tune in’ to important galactic information, and that our future held a rather transhumanist S.M.I2.L.E. (Space Migration / Increased Intelligence / Life Extension). Terrence Mckenna thought psilocybin had helped him decipher the I-CHING, and develop a theory of novelty which predicted that Dec 21, 2012 would “be the entry of our species into hyperspace. It will appear to be the end of physical laws, accompanied by the release of the mind into the imagination.” Ketamine drenched psychedelic explorer John Lilly, when he wasn’t attempting to communicate with dolphins, warned us about a borg-like, solid state, extra-terrestrial intelligence that was attempting to absorb all organic life.

While we shouldn’t quickly dismiss their pioneering contributions to exploring and reporting on both the ecstatic and terrifying nature of visionary space, clearly, these beliefs should give us pause before we drink the Kool-Aid of revelatory psychedelic truth. Oddness abounds, it seems a dangerous mistake to elevate such subjective conjurings to the level of ‘the truth’. Perhaps they can best be interpreted in terms of something like Jeff Kripal’s narrative centred take on paranormal experiences. “They have everything to do with story and plot and symbol and sign. I think a lot of people’s paranormal experiences are powerful, precisely to the extent they’re about story and meaning and have really very little to do with the material, causal processes.”

Kripal’s view does not deny the reality of these experiences, but it questions the value of the laser-like, often desperate focus on cornering truth that seems to dominate the discourse at the expense of meaning and context. Lived experience is a powerful generator of beliefs, and will likely continue to be, despite the best attempts of rationalists to convince us to ‘believe as we say, not as you see.’

Even if it were possible to objectively observe without subjectively interpreting, politics and intellectual popularity contests often play as large a part in expert consensus as any fact could hope to. The scientific enterprise should, and has, convinced us that the earth is round, or that moving magnets can produce electricity, but the authority of these near-certainties is often evoked for less empirically knowable claims like ‘brains create minds’, or ‘there is no life after death’. Knowing what makes this difference is crucial, as ambiguity, chaos, and complexity obscure objectivity – often irreparably.

At the very least, whether an unconventional splash in the neurochemical soup coaxes the brain into producing these phenomena, or quiets the brain, and connects us to whatever the hell does, psychedelics instruct us on the arbitrary nature of consensus reality. A slight tweak in what constitutes our day-to-day brain chemistry, and colourful visionary patterns and interpersonal dissolution would be normality, while the idea that we are all separate individuals, apart from wholeness and love, would be the hallucinogenic trip. This inter-dimensional bird’s eye view should give us pause before deciding consensus reality represents how things actually are.

Though I would never dare to suggest a designed intention, there is something both tragic and poetic in imagining that the ultimate nature of reality lies beyond the grasp of empiricism. What better mystery than the one that never gets solved, no matter how much closer each discovery makes it seem? What better generator of awe? What better generator of humbling elevation to those fools arrogant enough to claim that they ‘know’?

Psychedelics stoke these mysteries, and yield just the right amount of destructive potential, breaking down static, outdated frameworks and clearing space for the flourishing of something new and meaningful. Embracing this process requires openness, intelligence, reverence, and perhaps most of all, what Erik Davis called “that most telepathic of human emotions”: empathy.