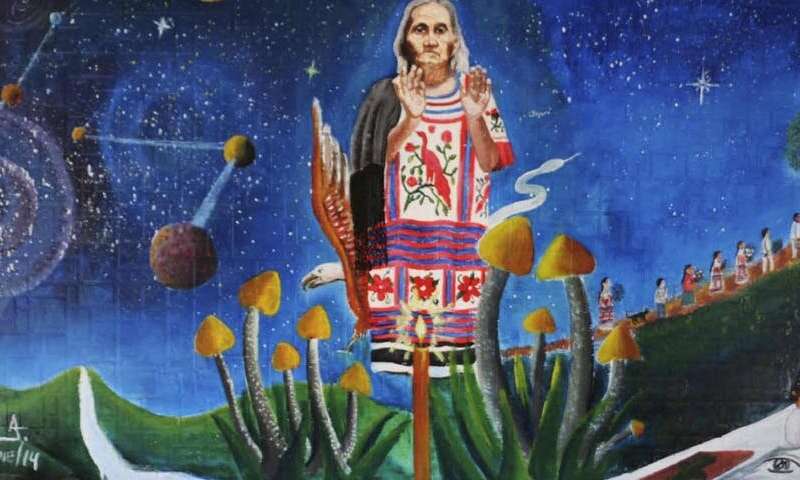 A universal mystical experience with life-changing effects can be produced by the hallucinogen contained in magic mushrooms, scientists claimed yesterday.

Forty years after Timothy Leary, the apostle of drug-induced mysticism, urged his 1960s hippie followers to “tune in, turn on, and drop out”, researchers at Johns Hopkins University in the US have for the first time demonstrated that mystical experiences can be produced safely in the laboratory.

They say that there is no difference between drug-induced mystical experiences and the spontaneous religious ones that believers have reported for centuries. They are “descriptively identical”.
And they argue that the potential of the hallucinogenic drugs, ignored for decades because of their links with illicit drug use in the 1960s, must be explored to develop new treatments for depression, drug addiction and the treatment of intolerable pain.

Anticipating criticism from church leaders, they say they are not interested in the “Does God exist?” debate. “This work can’t and won’t go there.”

Interest in the therapeutic use of psychedelic drugs is growing around the world. In the UK, the Royal College of Psychiatrists debated their use at a conference in March for the first time for 30 years. A conference held in Basel, Switzerland, last January, reviewed the growing psychedelic psychiatry movement.

The drug psilocybin is the active ingredient of magic mushrooms, which grow wild in Wales and were openly sold in London markets until a change in the law last year.

For the Johns Hopkins study, 30 middle-aged volunteers who had religious or spiritual interests attended two eight-hour drug sessions, two months apart, receiving psilocybin in one session and a non-hallucinogenic stimulant – Ritalin – in the other. They were not told which drug was which.

One-third described the experience with psilocybin as the most spiritually significant of their lifetime and two-thirds rated it among their five most meaningful experiences.

In more than 60 per cent of cases the experience qualified as a “full mystical experience” based on established psychological scales, the researchers say. Some likened it to the importance of the birth of their first child or the death of a parent.

The effects lasted for at least two months. Eight out of 10 of the volunteers reported moderately or greatly increased wellbeing or life satisfaction. Relatives, friends and colleagues confirmed the changes.

The study is one of the first in the new discipline of “neurotheology” -the neurology of religious experience. The researchers, who report their findings in the online journal Psychopharmacology, say that, though unorthodox, their aim is to explore the possible benefits of drugs like psilocybin.

Professor Roland Griffiths, of the department of neuroscience and psychiatry at Johns Hopkins, said: “As a reaction to the excesses of the 1960s, human research with hallucinogens has been basically frozen in time. I had a healthy scepticism going into this. [But] under defined conditions, with careful preparation, you can safely and fairly reliably occasion what’s called a primary mystical experience that may lead to positive changes in a person.

“It is an early step in what we hope will be a large body of scientific work that will ultimately help people.”

A third of the volunteers became frightened during the drug sessions with some reporting feelings of paranoia.

The researchers say psilocybin is not toxic or addictive, unlike alcohol and cocaine, but that volunteers must be accompanied throughout the experience by people who can help them through it.

The study is hailed as a landmark by former director of the National Institute on Drug Abuse, Charles Schuster, in a commentary published alongside the research.

In a second commentary, Huston Smith, America’s leading authority on comparative religion, writes that mystical experience “is as old as humankind” and attempts to induce it using psychoactive plants were made in some ancient cultures, such as classical Greece, and in some contemporary small-scale cultures.

“But this is the first scientific demonstration in 40 years, and the most rigorous ever, that profound mystical states can be produced safely in the laboratory. The potential is great.”